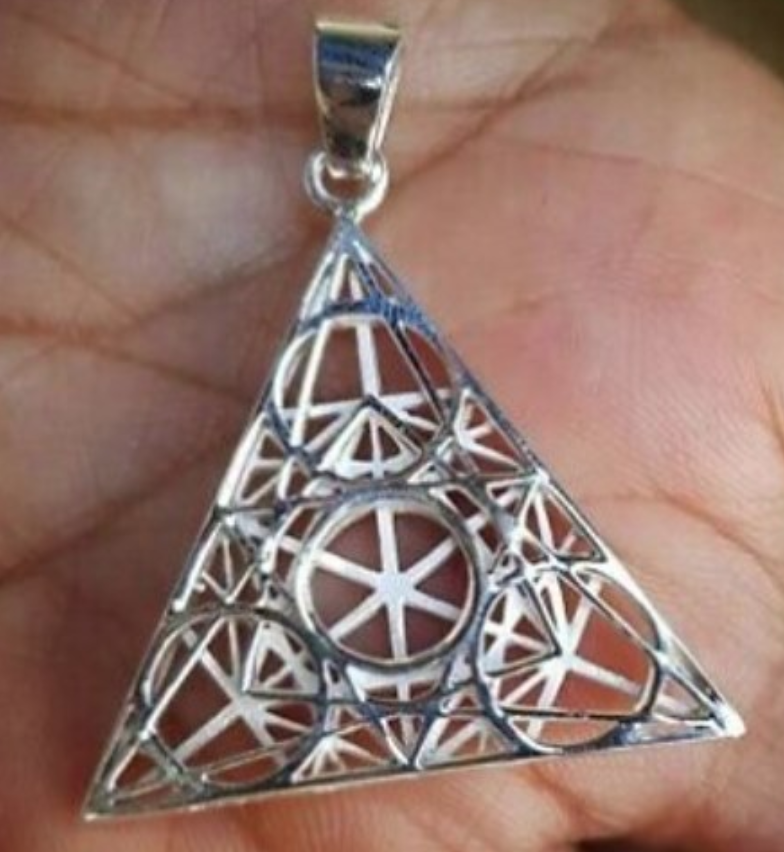 10000000
*A one-time handling fee of $12.00 will be added to your shipping total at checkout.
Categories:
Manufacturer: Jivas Jules

This Tetra-grama grid Is a multiple geometric references to proportion interface and compact nesting information. Where Phi and 60 * meet and manifest reality.  IN other words, there is a lot going on here - somethings to explore and discover -

When I started making geometry jewellery some people wanted to Have flat versions because the 3 d pieces were Poky and often Hug repellants, 🙁   . But the 3d seemed so much more powerful - for someone this very familiar with the shapes they will have the same experience with a flat version as they do with a 3d [ see the cube example below].  But for most the flat 2d didn't carry the same strength -  One day we had a booth at a geometry convention in SF and Juliet was wearing a flower of life and a seed of life on the same chain so that they overlapped. One was silver and the other abalone shell - we had been having problems with the shell pieces breaking but seeing them together gave me an idea - so I wired them together - the silver protected the shell - but more importantly I had created a 3d image out of two  2d mandalas - the visual aspect was great but the energetic effect was far beyond 1+1 -    I soon realised that if I combined various configurations it was no just 3d effect but Multidimensional.   That even a person who had no experience or understanding of hyper geometry still got the same effect.

So this piece has 2 different grids front and back each with its own information and together forming an array of 3 d effects and up to 7 d effects -  so to explain everything could take a full days workshop just on this piece.  But One of the essences of it for me is its relationship to the geometry of ceremony 9 - where we talk about the Hy Jacking of our Sovereignty by religion by taking the “ tetragrammaton” to represent an archetypal deity diverting our geometric self reference to an unspeakable name of god. - for those of you who are not familiar with this - there will come an article in the near future. But for now, the short version is that this hyper-dimensional tetrahedron reminds and restores your Original manifestation of an individual fractal of source simultaneously one and different. And it is a portal into the creative vortex where spirit and Matter meet at the border between the infinite in and the infinite out.

The cube example - when you look at the 2d drawing of a cube made of 12 lines your brain is capable of seeing it in 3d - and when you try to decide which is the front or back your brain can turn it inside out from every face - so it becomes a hyper cube.